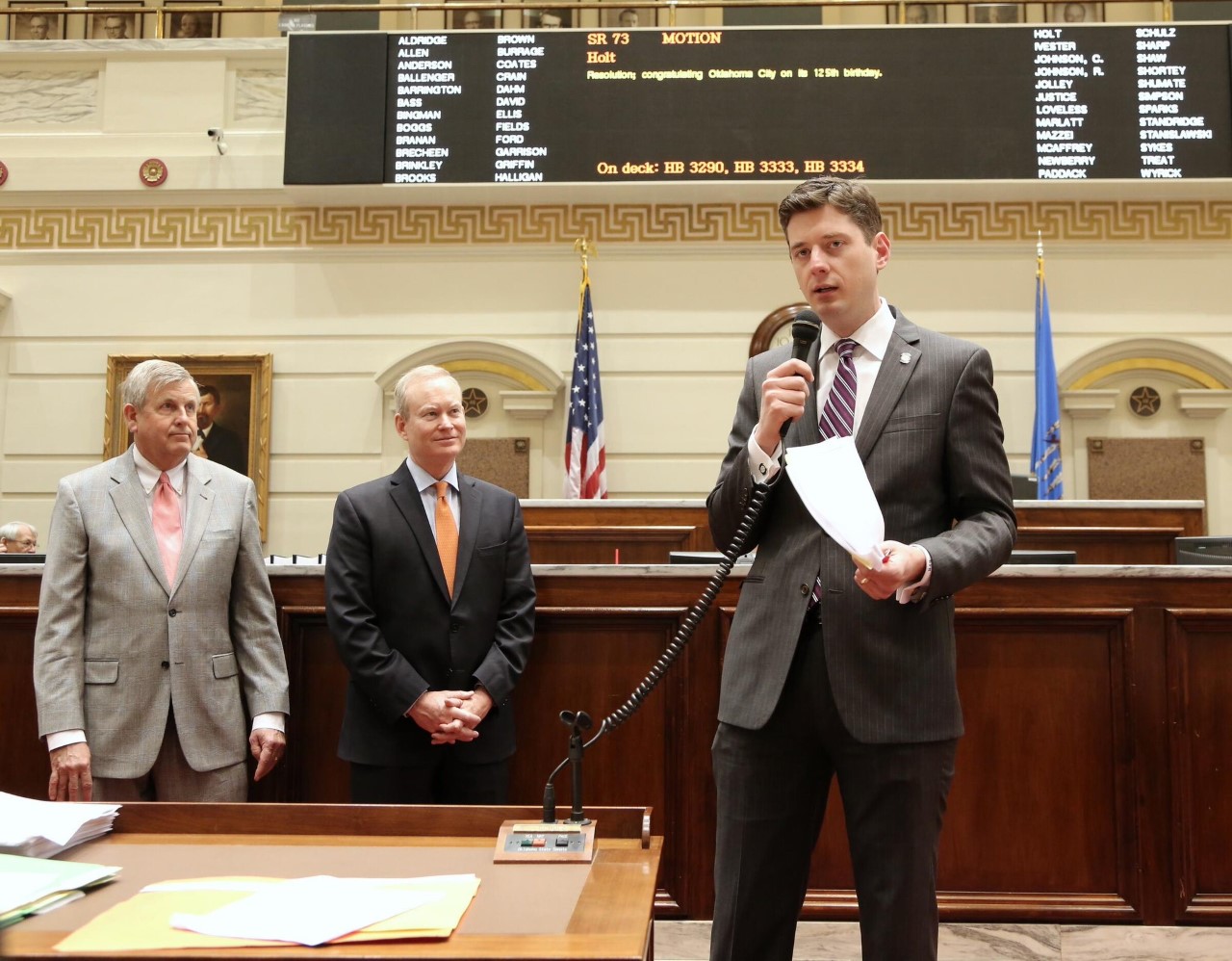 As referenced previously, Mayor David Holt had already served a U.S. House Speaker, a U.S. President, a Lt. Governor and Members of the U.S. House and Senate when he became chief of staff to his predecessor, Mayor Mick Cornett, at age 26. He served five years in that position before being elected to the Oklahoma Senate, where he served almost eight years.

Holt was elected to the Senate on July 27, 2010 with 64 percent of the vote in the primary and was unopposed in the general election. He took office on November 16, 2010. His 2014 re-election to a second term was unopposed.

On his first day in office, Holt was elected to Senate leadership, serving first as Vice Chair of the Majority Caucus and then later as a Majority Whip.

When he left the Senate, Holt was serving as Chairman of the Appropriations Subcommittee on Public Safety & Judiciary and was serving on the General Government, Judiciary, Appropriations, and Energy committees. Holt also served on the Oklahoma Compensation and Unclassified Positions Review Board, the Interstate Commission for Adult Offender Supervision, and the Occupational Licensing Task Force. Holt had previously served as Chair and Vice Chair of the Appropriations Subcommittee on Select Agencies, Vice Chair of the Business and Commerce Committee, and Vice Chair of the Redistricting Committee, responsible for Central Oklahoma. Holt also served on the Joint Legislative Water Committee.

Then-Senator Holt was a diligent legislator focused on the most important issues facing Oklahoma families. He authored over 70 pieces of legislation that became law and was especially noted for his persistent work to improve government transparency, his efforts to increase voter participation, and his legislation supporting women, children, economic growth, and public education.

Then-Senator Holt also used his position to bring attention to important events, people, and places, especially in Oklahoma City. He led a successful effort to place a portrait of Ralph Ellison in the Capitol, and he also spearheaded the state’s first official recognition of Hanukkah. He also organized a project to place signage marking Route 66 throughout Oklahoma City. Holt also carried resolutions in the Senate to recognize events like Oklahoma City’s 125th birthday, the centennial of Jim Thorpe’s 1912 Olympics, the 50th anniversary of Oklahoma’s first African American Senator, the 20th anniversary of the Oklahoma City Bombing, and the annual winner of the Jim Thorpe Award. In 2016, David also played a critical role in securing the filming of the hit NBC television show “American Ninja Warrior” for Oklahoma City.

Holt’s record in the Senate caused Chuck Todd of NBC News to name him a “Rising Star” in Oklahoma politics in 2014. His dedication to Oklahoma City caused him to be named “OKCityan of the Year” in 2017.

Holt received numerous other awards during this time, including:

• “Humanitarian Award” from Teachers Appreciation Award, in recognition of his support of teachers

During his time in the Oklahoma Senate, Holt was frequently selected for national organizations and programs. In 2017, he was selected to participate in the Aspen Institute’s Rodel Fellowships in Public Leadership program. From 2016 to 2018, he served as a member of the national Uniform Law Commission. For three years, Holt served on the national board of GOPAC and was also a graduate of the State Legislative Leaders Foundation “Emerging Leaders” program. In 2012, Holt was a member of the Electoral College.

In 2012, Holt served as a member of a delegation to China and Taiwan sponsored by the U.S. State Department and the American Council of Young Political Leaders. In 2015, he hosted an ACYPL delegation from China in Oklahoma City. In 2016, he was invited to speak on a panel in Doha, Qatar. He was also selected to participate in the 2016 young leaders conference of the Council for the United States and Italy, held in Naples, Italy.

During his time in the Senate, then-Senator Holt professionally practiced law and served as an adjunct professor at Oklahoma City University. He was also an active community volunteer.

Holt was also a champion for public education, serving on the boards of the Foundation for Oklahoma City Public Schools and the Putnam City Schools Foundation.

Along with these other community activities, Holt served as President of the Ralph Ellison Foundation. In 2013, he co-chaired the 25th anniversary celebration of the Myriad Botanical Gardens. Holt is also a graduate of Leadership Oklahoma City Class XXVI and was a member of the 2017 class of the Tinker Air Force Base “Honorary Commanders” program. Through the years and previous to his election as Mayor, Holt served on another two dozen local or state boards not mentioned here.