Join us Wednesday, March 28 at the Cox Convention Center for the 17th annual Mayor's Development Roundtable.

Each spring, Mayor Mick Cornett hosts the Mayor's Development Roundtable. This event highlights the public and private sector's commitment to developing a great community by bringing together experts, local panel members and attendees to discuss topics relevant to Oklahoma City's growth and development. 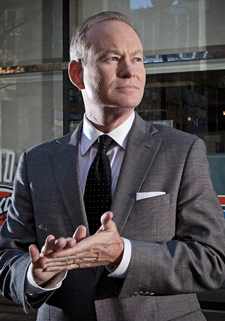 The son of postal worker and school teacher, Mayor Mick Cornett was born and raised in Oklahoma City.

From an early age, his parents taught him the value of public service and encouraged him to keep the faith, work hard and dream big.

He has been honored by various organizations and publications as the top Mayor in the state and nation -- and an international panel selected Mayor Cornett as the second-best mayor in the world. Newsweek magazine called him one of the "five most innovative Mayors in the United States."

He is the former President of the US Conference of Mayors. He famously put the entire city on a diet to raise awareness on the national issue of obesity. His leadership helped bring the NBA to OKC. During his time in office, Oklahoma City has invested nearly $2 billion in schools and quality-of-life infrastructure through the innovative MAPS program. That investment generated nearly $6 billion in private sector investment. Today, Oklahoma City's economy is one of the nation's most robust.

Mayor Cornett is a popular national speaker on the topics of health and wellness, urban design, placemaking and walkable cities. His TED TALK on those topics has been viewed by more than 1 million people worldwide. 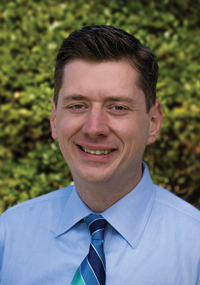 The son of a teacher and a social worker, David has had family in Oklahoma City for the better part of a century.  David received his B.A. from George Washington University and his law degree from Oklahoma City University. David served in the White House and at City Hall as Mayor Cornett’s chief of staff before spending the last eight years in the Oklahoma Senate. There, Holt authored over 70 pieces of legislation that became law.

David has served on dozens of community boards and is the author of “Big League City: Oklahoma City’s Rise to the NBA,” which chronicles Oklahoma City’s recent renaissance. David and his wife Rachel, COO of the Oklahoma Office of Juvenile Affairs, have two children, George and Margaret. The Holts are members of St. Augustine of Canterbury Episcopal Church.  Holt is a member of the Osage Nation. G.T. Bynum was sworn in as the 40th Mayor of Tulsa on Dec. 5, 2016. Before his election as Mayor, Bynum served for eight years on the Tulsa City Council. During that time, he was elected as the youngest city council chairman in Tulsa history.

Throughout his time in Tulsa city government, Mayor Bynum has focused on fiscal restraint, public safety, infrastructure and quality of life. He led the successful effort to enact the largest streets improvement package in the city’s history, authored the first city sales tax cut in Tulsa history, doubled the number of police academies to increase manpower, authored legislation creating the first municipal rainy day fund in Oklahoma and coordinated efforts to establish the first municipal veterans treatment court in the U.S.

Bynum is a proud graduate of two institutions operated by the Augustinian Order of the Catholic Church: Cascia Hall Preparatory School in Tulsa and Villanova University, where he served as student body president. He previously worked as the managing partner of Capitol Ventures, and before that in the U.S. Senate for senators Don Nickles and Tom Coburn.

Mayor Bynum comes from a family dedicated to public service and he and his wife, Susan, are the proud parents of Robert and Annabel – the sixth generation of Bynums to call Tulsa home.

Jeremy Nowak | Author, “The New Localism: How Cities Can Thrive in the Age of Populism” 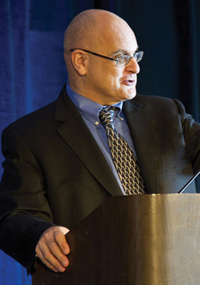 Jeremy Nowak is a Distinguished Visiting Fellow at Drexel University’s Lindy Institute for Urban Innovation. He was the founder of Reinvestment Fund, one of the largest community investment institutions in the United States. He chaired the Board of the Federal Reserve Bank of Philadelphia and currently serves on the board of the University City Science Center. He is an advisor to family offices, government, and universities around urban revitalization strategies. He recently co-authored, with Bruce Katz, "The New Localism: How Cities Can Thrive in the Age of Populism" (Brookings Press: 2018). 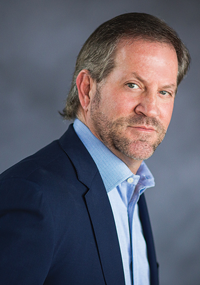 Gary Brooks has been in the commercial real estate market for over 25 years, beginning his career as a broker with CB Commercial in 1988. In 1996, Gary and Mark Beffort formed Beffort Brooks Property Company. They partnered with the national firm of Grubb & Ellis in 1998. Gary serves as President and CEO for Cornerstone Development and CS Property Management which he formed in 2008. Cornerstone’s sole focus is multi-family housing development and acquisition. Today, Cornerstone and its affiliated entities own and manage over 3,000 apartment units in the Oklahoma City metro area and Lawton. Current developments include the recently completed Edge at Midtown and the Steelyard in Bricktown. He serves on the Executive Committee of the Oklahoma City Urban Land Institute. 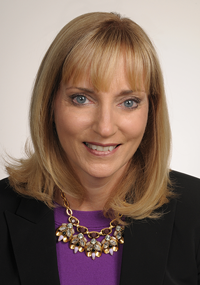 Cathy is the President and CEO of the Alliance for Economic Development of Oklahoma City, a non-profit corporation designed to coordinate public participation in economic development projects. In her role as President of the Alliance, Cathy has been instrumental in furthering development downtown and promoting job creation. She was the point person on the team that worked to locate the GE Global Energy Research Facility and the Boeing Aircraft Modernization and Sustainment division in Oklahoma City. She also is very committed to the redevelopment of distressed areas and led the efforts to create the NE Renaissance Urban Renewal Area and Tax Increment Finance district and the Core to Shore Tax Increment Finance District.

Before becoming President of the Alliance, O’Connor served as an Assistant City Manager with the City of Oklahoma City, where she worked to bring Bass Pro Shops, QuadGraphics and Dell Computers to the metro. She led the City’s team to structure the terms for the redevelopment of the historic Skirvin Hotel. In her role with the Alliance, she continues to have responsibility for the City’s Tax Increment Finance program; the Strategic Investment Program, a local job creation fund; and the City’s Urban Renewal Authority.

O’Connor is active in a variety of community organizations and serves on the board of directors of the United Way of Central Oklahoma, Commercial Real Estate Women of Oklahoma City, and Historic Preservation Inc. Cathy was named the Journal Record’s Oklahoma Woman of the Year and received the Stanley Draper Award for Community Excellence from Downtown Oklahoma City, Inc. 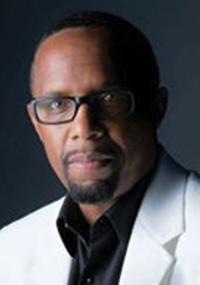 Michael Eric Owens is the Community Development Director for the Alliance for Economic Development of Oklahoma City. He is a distinguished scholar, writer, and speaker. Michael is the founder of and serves as the Executive Director of the Ralph Ellison Foundation. He is also the co-host of the One Mic, One Voice show, which has an international listening audience.

Throughout his career, Michael has received countless awards and is a proud member of the National Scholars Honor Society. As a leader and advocate for minority communities throughout the U.S., Michael has created, spearheaded, and coordinated community programming that is engaging and unifying. He transitioned to Oklahoma with a proven record of bringing diverse communities together for collaboration and cultural and social exchanges. Michael has appeared on such programs as OKC Metro, OKC Mayor Magazine, and the Fox Morning Show. He has been interviewed on numerous national radio programs.

Michael serves on the Oklahoma Civil Rights Commission Advisory Board, the Oklahoma City Arts Commission Board, Oklahoma Visual Arts Coalition and the Lynn Institute Board of Directors. Michael was named 2013 Educator of the Year by Perry Publishing & Broadcasting.

As a community organizer, Michael has administered literacy, leadership, and mentor programming. He continues to be successful at integrating divergent opinions, dispelling misconceptions and mitigating conflict in community building. Michael is a skilled strategist, helping local leaders reach a consensus regardless of their initial position. In his spare time, Michael enjoys spending time with his family, reading and writing, and exploring the outdoors of Oklahoma.

Roy has a Bachelor of Business Administration degree from Texas Lutheran University and pursued his M.B.A. at Sam Houston State University. As well, he is a graduate of the Institute for Organization Management at Southern Methodist University, successfully completed the American Chamber of Commerce Executive Leadership Program at the Center for Creative Leadership in North Carolina, and is a graduate of the Governor’s Center for Strategic Leadership for State Executives program at Duke University.

In 2008, Roy was the recipient of the prestigious Chairman’s Award from the Chairman of the American Chamber of Commerce Executives (ACCE) Board of Directors for his significant contributions to ACCE and the chamber profession. Roy served as Chairman of the Board for ACCE for 2012 -2013. Roy also recently earned his Certified Chamber Executive (CCE) certification. This is the only national certification for chamber professionals and demonstrates extensive knowledge in four core chamber management areas. 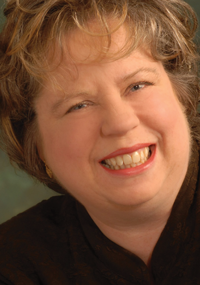 Montgomery is president and founder of the Oklahoma City-based Preservation and Design Studio, an architecture and design firm specializing in Historic Preservation. The Studio’s projects include varied building types such as hospitality, Class A office, multi-family residential and retail. Most projects seek to use preservation tax credits, some are for property owners in locally zoned Historic Preservation districts and others are new construction. PandDStudio also prepares existing structures reports, HABS/HAER documentation, historic architectural surveys and National Register nominations.

Before focusing on her studio, Catherine served 23 years in public service including at the University of Maryland, the Oklahoma State Historic Preservation Office (SHPO), the Oklahoma Historical Society and the City of Oklahoma City. She has consulted on hundreds of historic buildings totaling nearly $500 million in successful certified preservation tax credits projects across Oklahoma and Texas including 10 projects for Midtown Renaissance instrumental in the redevelopment of Midtown Oklahoma City, the Skirvin Hilton Hotel and the Architect for the Ambassador Hotel in Midtown OKC. 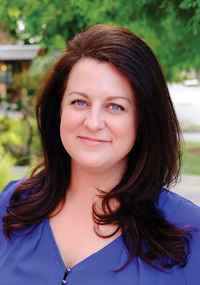 Parks anchor vibrant communities, typically increasing property value, attracting new constituencies and bolstering local businesses. A Gathering Place represents an opportunity to turn Tulsa’s waterfront into a force for the city’s social, economic and environmental sustainability. Given Tulsa’s rich architectural history and cultural institutions, this diverse and highly active waterfront park will complement existing urban amenities and strengthen the connections between the city and its natural environment. A Gathering Place for Tulsa is the largest private gift to a public park in U.S. history and is projected to attract an estimated one million visitors annually.

This year’s “20/20 Lightning Round,” where presenters have 20 slides and 20 seconds per slide, features three local leaders providing updates on development opportunities, investments, and changes taking place in Oklahoma City.

This 20/20 Lightning Round features three local leaders sharing updates on projects and programs.

Jeremy Nowak | Author, “The New Localism: How Cities Can Thrive in the Age of Populism”

The New Localism: How Cities Can Thrive in the Age of Populism

Power is shifting downward from national governments and states to cities, counties, and metropolitan communities; horizontally from the public sector to networks of public, private and civic actors; and globally along circuits of capital, trade, and innovation. This new localism is emerging to solve the grand challenges characteristic of modern societies: economic competitiveness, social opportunity; a renewed public life; and the imperative of environmental sustainability. Jeremy Nowak will present some of the findings from his recent book co-authored with Bruce Katz, and suggest some of the norms of growth, governance, and finance that emerge from their case studies.

Mayor Cornett moderates discussion among the conference’s main speakers and takes questions from the audience in this open Q&A format.

12:55 | Closing Remarks and Special Thanks