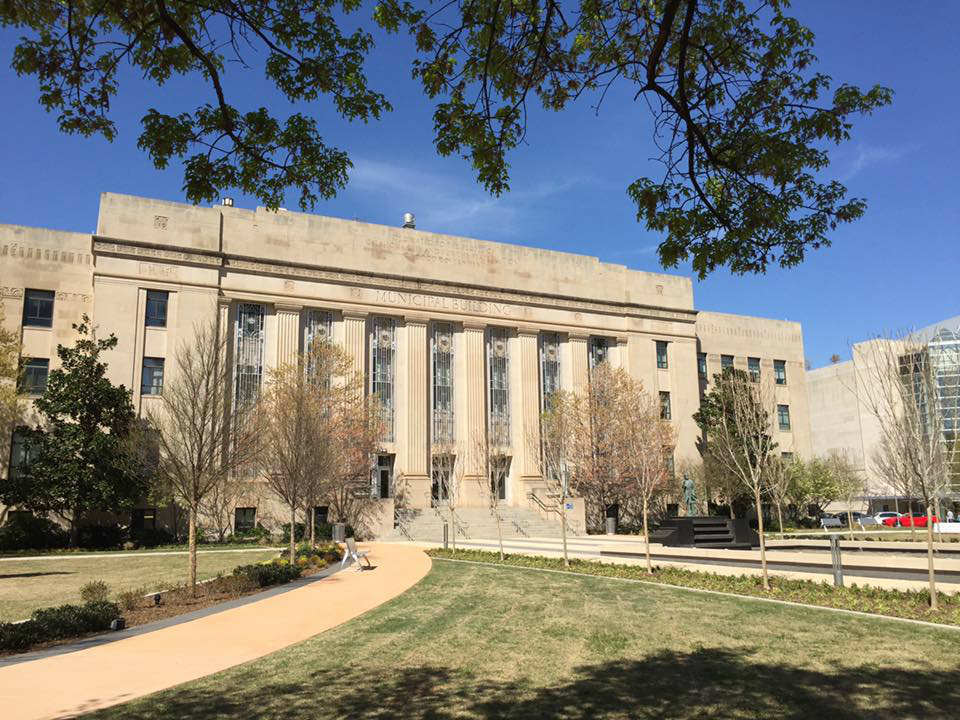 City Hall opened for business in March 1937. Also called the Municipal Building, City Hall was one of four structures built with matching funds from a U.S. Public Works Administration grant. The other three buildings are the Oklahoma County Courthouse, the Municipal Auditorium (now the Civic Center Music Hall), and the Police Headquarters (now non-operational).  This group of buildings was commonly known as the Civic Center, being the home of local government and the arts. In 1927 residents voted to remove a track of railroad between Park and Robert S. Kerr Avenues and purchase the land for public use. PWA Project #Oklahoma 1005-R was underway in 1932.

City Hall’s Art Deco style has Classical Revival motifs, a combination of styles commonly referred to as “PWA Deco” because of its widespread use during the Great Depression in the 1930s. The concrete foundation supports the exterior walls of Bedford limestone. The interior is lined with seven different types of marble, and the floor is Montana travertine and terrazzo. The inlayed travertine and marble compass in the lobby shows the elevation of Oklahoma City at 1,200 feet above sea level. The light fixtures are original, as are the aluminum grills and doors.

Until the 1990s, City Hall housed offices that are now located throughout three downtown office buildings. This changed during a massive interior renovation from 1995 to 1998 based on plans drawn up by architect Rand Elliott. City Hall remained open throughout the floor-by-floor renovation process, and many offices were moved to their current locations at 420 W Main St. and 100 N Walker Ave. During that time, City Council met in the basement of the Civic Center Music Hall.

The council chamber is on the third floor with original wooden pews furnished in 1937. The chamber is used by the City Council and for many other public meetings, including the Airport Trust, Water Utilities Trust, Planning Commission, Historic Preservation Commission, OCMAPS Trust and the MAPS 3 Citizens Advisory Board.

City Hall was added to the National Register of Historic Places on June 5, 2007.